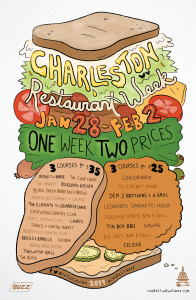 In its sixth year, #cwvrestweek features 26 independently-owned restaurants, each participating at one of two different price options!  At $25 or $35, each diner will receive an appetizer, entree, and dessert from a prix fixe menu.

Organized by local meat and seafood distributor Buzz Food Service, Charleston Restaurant Week has established itself as an annual week-long celebration of the city’s best food and local eateries, bringing together residents and visitors to try new restaurants and support small business. Charleston Restaurant Week offers a specialty menu, with some restaurants serving their most popular fare and others featuring dishes only available during the promotion. Restaurants often partner with local bakeries and pastry shops to feature local desserts, and many have drink specials or live music during the six night event.

Dickinson Gould, President of Buzz Food Service and a founder of Charleston Restaurant Week had this to say: “After five years of growth, it was clear that splitting the promotion into two different price brackets could work well for all parties.  First, the lower cost of $25 will make the promotion accessible for more diners to participate.  $30 was a bargain in this case, but still a lot of money for many people.  Second, some of the more casual venues were reaching up to a $30 price point that was higher than their average ticket.  Offering a $25 option made more of those restaurants feel comfortable participating.  Finally, some of the fancier fine dining establishments felt limited by the $30 price point.  We’re expecting to see a lot of creativity when the menus are released on January 12th and deciding where to dine will be more difficult than ever!”

Menus will be posted on January 12 to the promotion’s website, cwvrestaurantweek.com.  Diners are encourage to use #CWVRestWeek in their social posts.

Want to join the discussion?
Feel free to contribute!

Community News: Taste of Our Towns